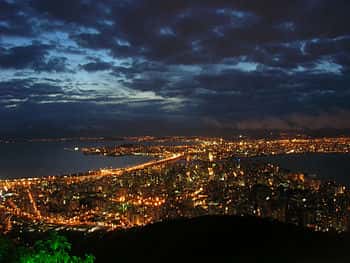 Florianopolis (Portuguese: Florianópolis) is the capital of the Brazilian state of Santa Catarina. Half of the city is on the mainland of Brazil while the other half is on the Santa Catarina Island. It has some of Brazil's most beautiful beaches.

Florianopolis is not the best place to monger while travelling in Brazil. Many travellers and locals say that the Florianopolis is more of a place to enjoy and meet single girls, have vacation romances and one-night hook-ups! You will have many hot chicas from all over Brazil vacationing in Floranpolis, but you also have lots of sexy ladies from Argentina, Chile, Europe and Uruguay in Floripa as well. The girls hanging out at the beaches in Florianopolis are much more beautiful than any other beach in Brazil!.

MY FAVORITE PLACES TO GO AT NIGHT (FO

There are some add websites for independent girls for incall or outcall by calling the girl's number, to make sure there are no fake profiles at their websites.

Nina Said is one of the girls that can communicate in English, her phone number is at the website available for whatsapp +55 11 957780060 she also uses twitter to pics and video www.Twitter.com/ninasaidoficial and her website Ninadias.com.br awesome girl for parties with her girlfriends.

It is easy to get sex online in Florianopolis. You just need to find the best available girls. See Girls Online Here!

A red-light district is a part of an urban area where there is a concentration of prostitution and sex-oriented businesses, such as sex shops, strip clubs, adult theaters, etc. The term originates from the red lights that were used as signs of brothels. There are areas in many big cities around the world which have acquired an international reputation as red-light districts. Some red-light districts have acquired a touristic interest beyond sex tourism, and can be perceived as places of artistic, historic or cultural interest, whether or not they still serve the sex trade.

The most famous red-light districts in Brazil are Vila Mimosa in Rio de Janeiro and Rua Augusta in São Paulo.

Quality of Girls for that Southern Brasil Italian/German look is 7 - 8's. Room is 50 Rs. and Girl is 150 Rs. Charge to leave the establishment with the girl 100 Rs and then the girls fee also.

Street walker in Brazil costs from 20 reais to 80 reais depending her looks, your looks and your negotiation skills. Many times streetwalkers are drug addicts or alcoholics. It's more difficult to find good-looking prostitutes from the streets than from brothels or termas.

You can find many "sex clubs" from Floripa, but these establishments may try to hustle you, so make sure to look after your wallet and valuables!

In average brothel in Brazil you can have sex with Brazilian girl from 100 to 1000 reais for one hour. Brazil's most famous termas are located in Rio de Janeiro, but you can also find nice whore houses from Floripa. Termas are brothels which are similar than spas or bathhouses but working girls are waiting for customers inside.

Can I watch Live Sex Cams in Florianopolis? - Yes, you can! Basically you can watch our online live sex shows for free anywhere in the world if you’re connected to internet. You can choose any girl from our trusted WikiSexLive.com! Join to get 10 free private teasers and 9.99 credits for free!

Dating in Florianopolis can be a bit tricky due to cultural differences, so your best bet is to sign up for a dating site before your trip so you can meet a few locals ahead of time. AdultFriendFinder.com lets you meet local members in Florianopolis and get to know them on a personal basis before you arrive. Take advantage of site features like live chat and member to member webcams so you can begin flirting before arranging a face-to-face meeting. Since your time in Florianopolis may be limited, get to know each other’s desires beforehand, so that when you meet you can start having some real fun.

If you are looking for an alternative to escorts in Florianopolis with a girl who doesn’t charge by the hour, sugar dating is the ideal solution. There are thousands of beautiful young women at SecretBenefits willing to do anything for a man who will help them pay their bills.

Finding someone for transsexual dating when you’re on the road can be a bit tricky, so your best bet is to sign up for a dating site before you go so you can find locals ahead of time. TSdates.com is a dating site designed to help you find exactly what you are looking for in your hookup in Florianopolis. Take advantage of site features like live chat and member to member webcams so you can begin flirting before arranging a face-to-face meeting. With over 40 million members, and thousands of transsexual members around the world, TSdates.com is the world’s largest site of sex-minded friends for discreet encounters and will help you find your next transsexual play partner.

There are thousands of beautiful (T-girls) living in different parts of Brazil. High percent of them are also working as prostitutes.

Due to its high degree of acceptance and tolerance, gay travel is increasingly popular in Brazil. Brazil is open to LGBT tourists. However, be aware that homophobia is widespread in Brazilian society, and Brazil is not the sexual haven that many foreigners perceive it to be. Couples that in any way don't conform to traditional heterosexual expectations should expect to be open to some verbal harassment and stares if displaying affection in the streets, though several neighborhoods of many of the major cities are very welcoming of the LGBT population, and LGBT-oriented bars and clubs are common. It is best to gather information from locals as to what areas are more conservative and what areas are more progressive.

Brazil has always been a very popular tourist destination due to its exotic wildlife, beautiful people, pristine beaches and raucous festivals like Carnival. But it appears that Brazil might be vying for the number one spot for sex tourism as well. Additionally, Brazil is a popular destination for female sex tourism, which generally does not see rates as high as male sex tourism. For female tourists, it should not be hard to find male companionship from a bar or a nightclub. Male escorts can be also found from internet in Brazil and price for sex is very low.

If you don’t feel like visiting or cannot find any local sex shops in Florianopolis, you can easily order adult products from Online Sex Shop. There are many online sex shops where you can order sex toys etc.

Finding an escort when you're travelling can be a bit tricky. If you are looking for escorts in Florianopolis, Escort Directory is the ideal solution. There are thousands of beautiful young women at EscortDirectory.com waiting for your call!

Florianopolis is not as well known as Rio de Janeiro to the Europeans and North Americans. Florianopolis is one of those places where it is super easy to pick-up girls and also very easy to find sex workers. There are two parts in the Floripa that you should stay at. If you want to live like a "sex addict" and you enjoy going to posh clubs and having easy pickings at naughty hot Brazilian bar girls, then you should choose to stay in the northern part of the Island, called Jurerê. For more open-minded guys who like surfing, samba and bohemian lifestyle – it is best to rent your "airbnb" or a "hotel" close proximity to Lagoa da Conceição, which is close by to the Barra da Lagoa, Praia da Joaquina, and Praia Mole (three best beaches in all of Florianopolis).

If you are in your 20s, then it is best to choose to stay at the Barra Beach Club Ocean Front (in Barra da Lagoa) or Sunset Backpackers (near Praia Mole and Joaquina). This way you can fuck hot hostel travellers, local chicks and also hookers! How ever at the dorm room, it is risky to have sex, so better to choose the private room from the hostel and be the "king of the hill"!.

Motels where to have sex in Florianopolis:

The Brazilian motel is not the same as a US motel. Brazilian motels are designed for sex, not really for sleeping. If you’re staying at a hotel that does not allow guests, if you prefer to be discrete, if you feel uncomfortable inviting strangers into your apartment, or if you just want a special night with a favorite garota, you might consider a trip to a motel.

The “love motel” is an institution in Brazil. Its existence reflects certain realities in the lives of most Brasilians: most live in crowded households, many share bedrooms with youngsters or other roommates, and few have anything resembling privacy. Hence, motels: places where couples — married or not — can have a few hours of privacy for sex.

In 2003, it was estimated that about 6% of Brazilian prostitutes were infected with HIV. Gabriela Silva Leite, the executive director of Prostitution Civil Rights, says that because of information campaigns, condom use among prostitutes is high.

Travelers should be aware of Florianopolis social problems and crime before traveling or deciding to retire there. While Florianopolis is generally regarded as a safe city in comparison to other regions in Brazil, the city is not without its problems. Paying heed to these problems could mean the difference between an unforgettable vacation and a nightmare waiting to happen.

Prostitution, while not overbearingly so, is definitely among the Florianopolis social problems and crime you need to be aware of. If youngsters will be accompanying you on vacation this is all the more important to consider. Most families understandably find the practice of prostitution to be reprehensible and do not want their youngsters exposed to that in the streets. Locals and travel professionals agree that prostitution is most prevalent during the evening and close to the beaches. The best advice is to avoid the beaches during this time or exercise caution if you do visit them. Avoiding the Florianopolis slums is another sure-fire way to steer clear of prostitution.