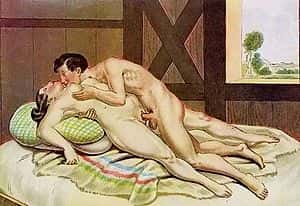 Sexual intercourse in the missionary position, the
most common human sex position, depicted by Peter Fendi

Religious beliefs also play a role in personal decisions about sexual intercourse or other sexual activity, such as decisions about virginity, as well as in legal and public policy matters. Religious views on sexuality vary significantly between different religions and sects of the same religion, though there are common themes, such as prohibition of adultery.

Reproductive sexual intercourse between non-human animals is more often termed copulation; for most non-human mammals, mating and copulation occur at the point of estrus (the most fertile period of time in the female's reproductive cycle), which increases the chances of successful impregnation. However, bonobos, dolphins and chimpanzees are known to engage in sexual intercourse regardless of whether or not the female is in estrus, and to engage in sex acts with same-sex partners. Like humans engaging in sexual activity primarily for pleasure, this behavior in the aforementioned animals is also presumed to be for pleasure, and a contributing factor to strengthening their social bonds.