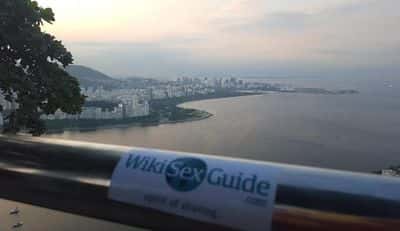 Brazil (Portuguese: Brasil), [1], is the largest country in South America and fifth largest in the world. Famous for its football (soccer) tradition and its annual Carnaval in Rio de Janeiro, Salvador, Recife and Olinda. It is a country of great diversity, from the bustling urban mosaic of São Paulo to the infinite cultural energy of Pernambuco and Bahia, the wilderness of the Amazon rainforest and world-class landmarks such as the Iguaçu Falls, there is plenty to see and to do in Brazil.

Sex tourism exists throughout the country, but it is most apparent in coastal resort towns in the Northeast, South, and Southeast, and in major tourist destinations such as Rio de Janeiro and Fortaleza, Ceara, as well as in the wildlife tourist areas of the Pantanal and Amazon.

Recent reliable estimates on the total number of prostitutes are not available. In the late 1990s, the International Encyclopedia of Sexuality quoted police estimates putting the total number of prostitutes in Brazil at about 1,000,000. In 2002, pressure by the sex worker organization Davida contributed to the Brazilian Ministry of Labor adding "sex worker" to an official list of occupations. Prostitution is not regulated in any way (no mandatory health checks, no licenses are issued etc.), but street prostitutes and call girls can contribute to the official government pension fund and receive benefits when they retire.

According to a poll taken in 1998 (15 years ago), 64% of the population thought prostitution was immoral and should be made illegal, whereas 29% saw it as a job like any other. Fifty nine percent (64% of women) believed that prostitutes do what they do because they like it.

The press reported at the end of 2008 that a government official has announced that the site would be "toned down", following criticism by the media. The law professor Luiz Flavio Gomes has told the O Globo newspaper in its online edition that "What is on the site gives the impression of an apology for sexual exploitation."

The job of a prostitute is called "Professional of sex" and is described as follows: "They [the prostitutes] work on their own initiative, in the street, in bars, night-clubs, hotels, harbor, highways and in garimpos (gold prospecting places). They act in different environments: open air, closed places and inside vehicles, in irregular schedules. In the exercise of some of their activities they can be exposed to vehicles gases, to bad weather, to sound pollution and to social discrimination. There are still risks of getting STD infections, bad-treatment, street violence and death."

It is also stated that: "For the exercise of the profession is required that the workers take part in workshops on safe sex, offered by the category associations. Other complementary courses of professional formation, such as, beauty courses, personal care, budget planning, as well as vocational courses for alternative sources of income also are offered by the associations, in several states. Access to the career is open to those who are 18 or older; the average education is between fourth and seventh grade. Full performance of activities occurs after two years of experience."

Brazil is the fifth largest country on earth. It is divided into five regions, mainly drawn around state lines, but they also more or less follow natural, economic and cultural borderlines. 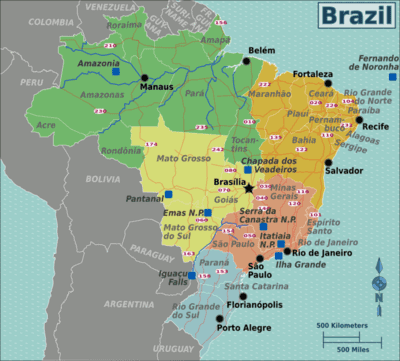 Brazil has many exciting cities, ranging from pretty colonial towns and coastal hideouts to hectic, lively metropolises; these are a few of the more prominent travel destinations:

Other cities also attract a good deal of travelers

Can I watch Live Sex Cams in Brazil? - Yes, you can! Basically you can watch our online live sex shows for free anywhere in the world if you’re connected to internet. You can choose any girl from our trusted WikiSexLive.com! Join to get 10 free private teasers and 9.99 credits for free!

Dating in Brazil can be a bit tricky due to cultural differences, so your best bet is to sign up for a dating site before your trip so you can meet a few locals ahead of time. AdultFriendFinder.com lets you meet local members in Brazil and get to know them on a personal basis before you arrive. Take advantage of site features like live chat and member to member webcams so you can begin flirting before arranging a face-to-face meeting. Since your time in Brazil may be limited, get to know each other’s desires beforehand, so that when you meet you can start having some real fun.

If you are looking for an alternative to escorts in Brazil with a girl who doesn’t charge by the hour, sugar dating is the ideal solution. There are thousands of beautiful young women at SecretBenefits willing to do anything for a man who will help them pay their bills.

Due to its high degree of acceptance and tolerance, gay travel is increasingly popular. Brazil hosted the first gay ball in America in 1754! Nowadays the main lesbian and gay destinations are Rio, which was elected the world's sexiest destination twice, São Paulo, which has the world's largest Pride Parade, Florianópolis, which is the hippest gay hangout and Recife which is attracting more and more lesbian and gay tourists looking for fun and sun.

Brazil is open to LGBT tourists. São Paulo boasts the biggest LGBT Pride parade in the world, and most major cities will have gay scenes. However, be aware that homophobia is widespread in Brazilian society, and Brazil is not the sexual haven that many foreigners perceive it to be. Couples that in any way don't conform to traditional heterosexual expectations should expect to be open to some verbal harassment and stares if displaying affection in the streets, though several neighborhoods of many of the major cities are very welcoming of the LGBT population, and LGBT-oriented bars and clubs are common. It is best to gather information from locals as to what areas are more conservative and what areas are more progressive.

By law, everyone must carry a photo ID at all times. For a foreigner, this means your passport. However, the police will mostly be pragmatic and accept a plastified color photocopy.

Even the most patriotic Brazilian would say that the greatest problem the country faces is crime. Brazil is one of the most criminalised countries of the world, therefore the crime rate is high, even for a developing nation. Armed bandits have more recently been attacking schools, hotels and even innocent people in the streets. While in recent years, the overall crime levels are steadily decreasing, Brazil continues to have moderately high crime rates in various aspects, even with a moderate homicide rate (about 28 per 100,000 people). Of significant concern is that policemen may not always provide the best quality of assistance and even be more dangerous than the criminals itself. Lack of man power, low wages and inappropriate training contribute to a lack of professionalism.

The best thing to do is to not act like a tourist, and do not display items of extreme wealth such as laptops, jewelry, etc. Also avoid carrying large amounts of money with you.

Although Brazil is widely known as a country where sex is freely available, it is sometimes misunderstood regarding HIV. Brazil has one of the best HIV prevention programs and consequently, a very low infection rate compared with most countries. Condoms are highly encouraged by governmental campaigns during carnival, and distributed for free by local public medical departments.

In 2003, it was estimated that about 6% of Brazilian prostitutes were infected with HIV. Gabriela Silva Leite, the executive director of Prostitution Civil Rights, says that because of information campaigns, condom use among prostitutes is high.

The Brazilian government turned down $40 million in U.S. anti-HIV/AIDS funding in 2005, because the U.S. government required all recipients to sign an anti-prostitution pledge. The Brazilian anti-AIDS program employs prostitutes to hand out information and free condoms; Brazil's AIDS commissioner Pedro Chequer was quoted as saying "Sex workers are part of implementing our AIDS policy and deciding how to promote it. They are our partners. How could we ask prostitutes to take a position against themselves?" A Washington Post article stated that the Brazilian anti-AIDS program is considered by the United Nations to be the most successful in the developing world.