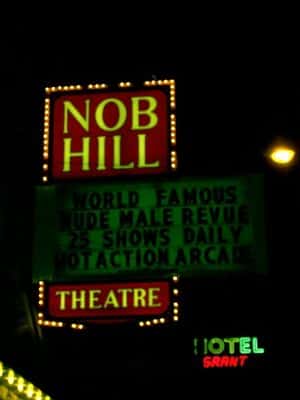 An adult movie theater is a movie theater where pornographic films are shown to an adult audience. There are usually continuous showings. The movie posters in front of the theaters normally feature no nudity.

Adult movie theaters show pornographic films primarily for either a heterosexual or Gay audience. Heterosexual films often attract heterosexual, bisexual and homosexual male patrons, some of whom are there for casual and anonymous sex with other patrons. The overwhelming majority of customers are male.

Before the VCR and, later, the Internet, a movie theater or cinema house was often the only location where people could see hardcore Adult films. The spread of home videos has led to a drastic reduction in the number of adult theaters.

What is a Gloryhole?

A gloryhole is usually a fist-sized hole, or at least , placed in a fairly thin sheet of plywood or metal partition. The hole is placed about hip high for the average man and is large enough to place a man's penis through to let the person on the other side perform whatever sexual activity he pleases on it.

What is a Tearoom?

Public toilets where this type of sexual activity happens are often called Tearooms.

What is a Buddy booth?

Buddy booths are video booths where a glass partition with dual curtains (or some other apparatus that blocks your view of the other booth) separates the two booths. There is a button on both sides that first raises and then lowers your (but not the other booth's) curtain. There are also electronic version of this where both people need to press the button at the same time to electronically clear the window between them. I have also seen a buddy booth as simple as a door with latches that opens between the two booths.

How does a buddy booth work?

When both buttons are pressed by both people, both curtains rise and you can see each other. Some of the booths require both buttons to be pressed at the same time. Buddy booths were designed to allow people to see but not necessarily touch each other. Some adult arcades have modified the booths so that the glass does not go all the way down to the bottom of the curtain. This allows you to see and feel each other at the same time with the safety of a wall between you.

What is a private video booth in an adult bookstore?

Some adult arcades have an area where you can put a token, a bill or a coin into a slot and have an adult video play for about 60 seconds on a TV screen in front of you. These booths are small enough (for example, 3' x 6') for one person to sit down and lock the door behind them. In some areas, these booths no longer have doors on them. Most places frown on having more than one person in a booth. Some however actually encourage it by advertising "couples booths".

Some adult arcades charge a entrance fee instead and/or some require that you buy a minimum of nonrefundable tokens.

What's is a "couples booth"?

Adult bookstore only advertises straight videos, could they also have gloryholes or couples booths?

In fact, for bisexual or married guys, this is a great deal! They can go into a place that they can have sex with another guy and not worry about someone see them go in and "blow their cover" and call them gays.

Is there an equivalent place for women?

If you think about it, it would be a little tough. A gloryhole assumes you have something to stick through.

How can you tell if an adult shop tolerates activity in the store?

The adult shops tolerates activity if:

The adult shop not tolerate activity if: 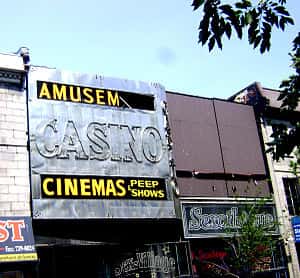 Restrictions on adult theaters vary by region, and may be restricted by local and state regulations. Local governments commonly prohibit adult theaters from operating within a certain distance of residential areas, parks, churches and/or schools. Often adult theaters have been forced to move to the outskirts of cities in order to protect real estate prices in city centers. Renton, Washington was involved in a 1986 Supreme Court case regarding this issue. In its decision on City of Renton v. Playtime Theatres, Inc., the Court upheld Renton's statute that no adult theater be located within 1,000 feet of a school, park, church, or residential zone; the Court rejected the theater owners' argument that the statute violated the First Amendment, because the statute did not seek to ban the existence of adult theaters outright.

Hollywood's Sunset Strip was home to many of Los Angeles' over 400 "adult" establishments and the largest such district in its state.

The O'Farrell Theatre in San Francisco, one of America's oldest and best known adult-entertainment establishments, opened as an adult movie theater in 1969.

The Bijou Theater in Chicago is the longest running gay adult theater and sex club in the United States.

There are approximately 60 adult movie theaters in the Netherlands. In 2010 a law on sex companies was under consideration. In addition to municipal rules a national rule is introduced requiring adult movie theaters to have a pornography display license. An advertisement of the company should contain its license number. The theater must have a sign outside showing that the company is licensed, while inside a copy of the license has to be displayed. Non-commercial sexual activities by and among clients do not require an additional license, but prostitution on the premises requires an additional prostitution company license.