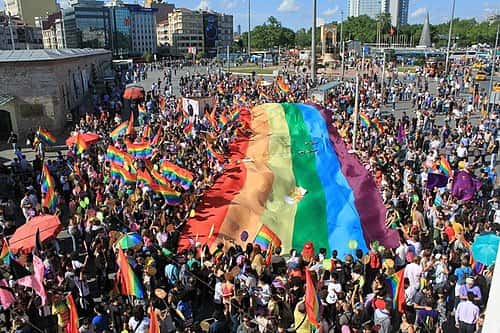 These destinations have specially designed for the gay communities and it is noted for openminded people. Friendly, funny, and cultural destinations with the best atmosphere. Here we will tell you what and where are the 10 best gay friendly destinations worldwide. More detailed info you may find in Gay and lesbian travel.

When we go on vacation we want to have fun and enjoy. It would not make sense to travel to a place where we know we are not going to be accepted as who we are.

These places listed below are Gay friendly of Gay welcoming.

San Francisco is the most iconic gay US city. The heart of gay community is The Castro. There you may find lots of gay friendly shops, hotels and night clubs. The Gay Pride San Francisco live throughout the city, with parties everywhere, music, entertainment and all kinds and floats with all the colors of the rainbow. Other gay welcoming destinations in the US are San Diego, Philadelphia, Fort Lauderdale, Miami and New York City.

The island of Mykonos in Greece is known for its open-mindedness, where people live without prejudice and you can feel completely free to be as you are. This is definitely a destination that has evolved into the Mecca of gay tourism. The whole island looks like a large elaborately decorated stage. All with the same white and pristine blue. Here are the best beaches in the Aegean Sea, and the best gay night clubs and parties.

Montreals St. Catherine Street, near the Beaudry subway station (you will recognize by the multicolored columns) is the center of the Gay Village (Neighborhood Gay) Montreal. In 1260 this street you will find a tourist information center of the Gay Village, where you will be informed about hotels, festivals, exhibitions, events and everything you need to know about the LGBT scene in Montreal. Both maps, brochures and magazines are available for free. The saunas, discos and nightclubs in major LGBT circuit is located on this street . The Sky Pub Club is the best place to start the evening. The Gay Village Montreal is the host of the Gay Pride festivities and one of the largest gay villages in North America . Another welcoming gay destination in Canada is Toronto.

Amsterdam is one of the most gay destinations in Europe and one of the most popular worldwide . They earned the title " Gay Capital of Europe" thanks to its open minded people. With the motto "Freedom is the dearest", the locals have made their city one of the top rated destinations for the LGBT community. It has over 100 bars, clubs, sex shops and shops made to the gay community . It has 5 gay areas districts: The Back Side, The Camping Tradition, The Dark Side, The Pink Point and The Vanilla Slice.

Many are already talking about Barcelona as the new gay capital of Europe. L' Eixample or GayEixample are the gay neighborhoods of Barcelona. Among the streets between Balmes, Calàbria, Gran Via and Provence, close to the city center. Most shops, hotels, nightclubs and a wide range of services to the LGBT population are concentrated. The historic neighborhood is safe and friendly, with exclusive shops open to the public. The gay scene in Barcelona is prominent and respected throughout the city, they even have gay beaches such as San Sebastian, Barceloneta and Nova Mar Bella. If you are visiting Spain, you can visit other gay friendly destinations such as Sitges, Ibiza, Gran Canaria, Canos de Meca ( Barbate ) and Benidorm.

Berlin's Schöneburg in the west of the city, and Prenzlauer Berg, in the East, are the most important centers of the LGBT community in Berlin. In Motzstraße, Kleiststrasse streets and Martin Luther Strasse is the highest concentration of pubs and nightclubs. The busiest area for lesbians in Berlin -Mitte and Kreuzberg. A major attraction is the Schwules Berlin Museum, which is dedicated to showcasing the history, art and gay culture . And in all of Berlin is celebrating the Christopher Street Day (Gay Pride) , the best known and busiest in Europe Berlin parade, which ends with a big party in the Victory Column. In this show we see the mayor of Berlin, Klaus Wowereit , known for his phrase: "I am gay and nothing happens." Berlin is a completely tolerant of the LGBT community city.

London is known as the homosexual entertainment world, it has over 100 gay bars and clubs! If you want to know the gay scene in London you should take a stroll through the SoHo neighborhood, right in the city center . There you will find theaters, shops and cafes. And if you are visiting the UK, you can explore other gay friendly destinations such as Bristol, Brighton, Manchester and Newcastle.

Buenos Aires has become the most popular gay friendly destination in Latin America. It has welcoming gay hotels, clubs, saunas, bars, aesthetic medicine and a clearly marked gay circuit. San Telmo and Recoleta neighborhoods are par excellence, where the main focus of gay encounter. One of the biggest attractions of Buenos Aires for gay tourism is learning to dance tango. A new concept is the Queer Tango , which is to change traditional norms and codes of this dance, experiencing an exchange of gender roles. If you find yourself traveling through Argentina, Córdoba , Rosario, Mendoza and Bariloche are important places for the LGBT audience.

This beautiful city, with a mix of sensual, friendly and passionate people has become one of the hottest gay friendly destinations. Rio de Janeiro is full of great bars, discos, restaurants, parties, cultural events intended for gay tourism. The main focus is the gay beach, just across the street Farme Amoedo is probably the gayest street in Rio, a place to relax and enjoy the wonderful view. São Paulo, the largest city in Brazil and South America, it's also among the most gay friendly cities of the world.

This small town is located in the Mexican Bay of Banderas and it is one of the most popular gay holiday destinations, certainly for its excellent climate, beautiful bay, beaches, mountains and rainforest. Puerto Vallarta also has numerous hotels, restaurants, bars and gay nightclubs, world famous gay beach (south end of the popular Playa de los Muertos), and gorgeous bay cruises. The gay beaches in the area of Olas Altas. One of the most frequent sites Cora is the Courtyard, there is a Jacuzzi bar with 50 seats. And finally, the gay nature park, Paco 's Paradise, with its own beach.