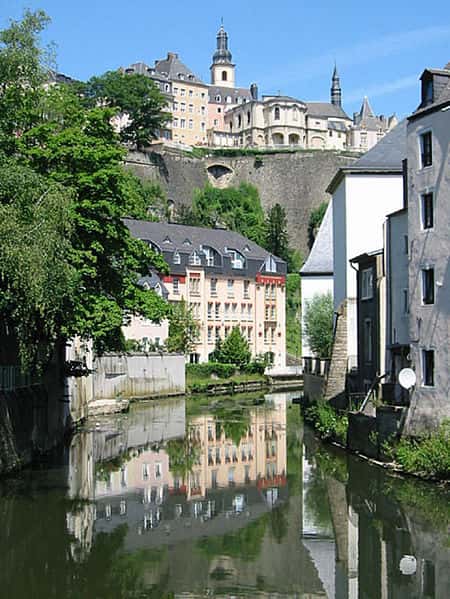 The Grand Duchy of Luxembourg [1] (Luxembourgish: Groussherzogtum Lëtzebuerg, French:Grand-Duché de Luxembourg, German: Großherzogtum Luxemburg), is a landlocked country in the Benelux bordered by Belgium, France and Germany, lying at the crossroad of Germanic and Latin cultures. It is the only Grand Duchy in the world and is the second-smallest of the European Union member states.

Sex and Prostitution in Luxembourg

Prostitution itself is legal in Luxembourg, but activities associated with organized prostitution, such as profiting from (operating brothels and prostitution rings) or aiding prostitution are illegal. Human trafficking incurs severe penalties. Currently government of Luxembourg is planning to do changes to the prostitution laws, but no changes has been confirmed yet.

There is no window type red-light district in Luxembourg. But there is a pint-sized red light district near the station, with girlie bars.

Luxembourg comes alive at night and Rue de Hollerich is the place to go for the best nightclubs and the chance to meet Luxembourg Escorts, while the old part of the city is the best place for bars and clubs like Scott’s Bar and Melissa. If you are feeling more adventurous in your search for an escort, you could always try out the area around the railway station. During the daytime, if you like to watch the girls go by, the south of the Ville Haute part of Luxembourg is buzzing with café culture.

Some upper class Ladies only go to hotels. As usual this is a 24h a day job and action starts when it ends and vice versa. BUT, best chances to get a good fuck is around 10pm. The most beautiful ladies work from 9pm to 1am, after this hour you'll find a lot of black women imported from Belgium or directly from Africa.

Sex prices are starting at 50euros they can be less (beware junkie alert) or more (decide yourself) for blow and fuck. Most girls just do protected sex, some black women will do "without". Main Language is French, but some speak English. Action takes place in car or in cheap hotels. Some estimates say that 60-80% of Luxembourg's street sex workers are Nigerian. Rest of the sex workers are mostly from Romania, Spain and Italy. It is never 100% safe to have sex with a street prostitute and there are definitely more STD´s among street girls than escorts who work at the brothels or private apartments.

Meeting local girls and getting laid for free is fun! Read more on how to pick up girls in Luxembourg: https://hookuptravels.com/wiki/Luxembourg

Can I watch Live Sex Cams in Luxembourg? - Yes, you can! Basically you can watch our online live sex shows for free anywhere in the world if you’re connected to internet. Join to get 10 free private teasers and 9.99 credits for free! You can choose any girl from our trusted Live Sex Cams!

It is easy to get sex online in Luxembourg. You just need to find the best available girls. See Girls Online Here!

Luxembourg is pretty small area, but you can find there some strip clubs and massage salons.

Finding an escort when you're travelling can be a bit tricky. If you are looking for escorts in Luxembourg, Escort Directory is the ideal solution. There are thousands of beautiful young women at EscortDirectory.com waiting for your call!

Luxembourg has many different Escort Services. Average cost is 100-300€ for one hour. There are adult dating websites, where women advertise themselves. In these ads you will find information about a woman and services she provides, also some of them post photos which makes it easier to make a good choice.

All the Luxembourgers go elsewhere for visiting brothels. Some to Arlon in Belgium but most to Germany.

FKK Saarbrücken and FKK Neunkirchen are just over an hour away by car.

Another branch of this high-class brothel is the "Villa Venezia Trier", discretely located in the Trierweiler-Sirzenich business park and directly on the motorway, this house is only 8 kilometers from the German-Luxembourg border.

There are some seedy nightclubs and strip clubs around railway station in Luxembourg City. Check the map. You will find an atmosphere of lust and luxury in local strip clubs. Beautiful strippers will offer to take them out for a private dance that costs somewhere around 15 Euro. The most popular strip club in the city is Saumur Crystal, located on 13, RUE DICKS, tel.: (+352) 49 05 52. Others are:

KTVs (hostess karaoke bars with beautiful female staff) are popular in some parts of Asia but you cannot find any of them from Luxembourg.

Sin Temptation, the Luxembourg's secret and private member-only swinger parties. (adresse is secret!)Sin Temptation is a social group, run as a private members club with regular social events in Luxembourg for the Swinging Lifestyle & community who want to enjoy a unique & stylish venue and the fre ...
Luxembourg Grand Duchy of Luxembourg

There are not many swinger places in Luxembourg, but Germany, France and Belgium are not far away and there are many more Swinger Clubs in those countries. Just one swinger club seems to be in Luxembourg area.

If you don’t feel like visiting or cannot find any local sex shops in Luxembourg, you can easily order adult products from Online Sex Shop.

Some of the sex shops have also sex kino attached to them. These premises are often popular among bi-curious and gay men. Admission fee is often something like 10€.

Love hotels are popular in some parts of Asia, especially in Japan. There are also many love motels and short-time hotels in South America. Unfortunately you cannot find any real love hotels in Luxembourg.

There are many nice nightclubs and bars in Luxembourg where you can try your luck to find sex for free. The best places to go to are:

Attracting social groups of all ages, with food all day, music, and a friendly vibe.
9 Avenue Monterey
Luxembourg Grand Duchy of Luxembourg

Serving lunch and dinner, with art shows and a multicultural mix.
27-29 rue Notre Dame
Luxembourg Grand Duchy of Luxembourg
See all Gay and lesbian in Luxembourg

There’s a small but enthusiastic gay community in Luxembourg City. The annual Gay Mat party, a small street party, is held each July in Luxemburg City. See other LGBT events at website Rosa Letzebuerg. To connect with the locals start from the gay friendly bars and cafés.

But if girl take the reins it can actually increase their sexual confidence and sense of agency, while giving men a break from having to be 'on top', psychologically as well as literally which is the standard dynamic for most lovers. The trick is to have an open mind to sexuality, obviously anything which causes harm to your loved one or yourself is not good, but we're all humans and exploring the parts that make us a little different is what can make a hugely beneficial relationship.

Dating in Luxembourg can be a bit tricky due to cultural differences, so your best bet is to sign up for a dating site before your trip so you can meet a few locals ahead of time. AdultFriendFinder.com lets you meet local members in Luxembourg and get to know them on a personal basis before you arrive. Take advantage of site features like live chat and member to member webcams so you can begin flirting before arranging a face-to-face meeting. Since your time in Luxembourg may be limited, get to know each other’s desires beforehand, so that when you meet you can start having some real fun.

If you are looking for an alternative to escorts in Luxembourg with a girl who doesn’t charge by the hour, sugar dating is the ideal solution. There are thousands of beautiful young women at SecretBenefits willing to do anything for a man who will help them pay their bills.

Finding someone for transsexual dating when you’re on the road can be a bit tricky, so your best bet is to sign up for a dating site before you go so you can find locals ahead of time. TSdates.com is a dating site designed to help you find exactly what you are looking for in your hookup in Luxembourg. Take advantage of site features like live chat and member to member webcams so you can begin flirting before arranging a face-to-face meeting. With over 40 million members, and thousands of transsexual members around the world, TSdates.com is the world’s largest site of sex-minded friends for discreet encounters and will help you find your next transsexual play partner.

Where can I find shemales in Luxembourg? You can watch transsexual live sex shows in Luxembourg as long as you are connected to internet. Check Now: Tranny Live Sex Video Chat

Most Shemales in Luxembourg advertise on internet. There is couple transexuals who work all year in Luxembourg. But usually every week there is new travelling Shemale escorts visiting Luxembourg.

In Rue de Hollerich Red-light district is a couple of massage parlors where you can find t-girls, but they change the parlour where they work quite often.

You can find male escorts from internet and usually they are willing to sell sex for both men and women. Male hookers usually charge 100€-250€ for one hour. For a lady Luxembourg is a easy place to find companion.

Here are some hotels who accepts escorts visiting your room:

Luxembourg is a safer environment than most other European capital cities, and it would be rare to encounter any physical threat. Nevertheless, care is required in and around the train station area (especially late at night).