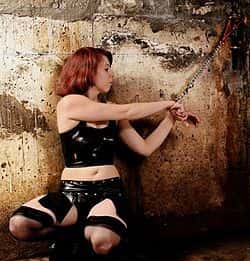 A woman is chained to the wall in bondage.

Individuals are also sometimes abbreviated when referred to in writing, so a dominant person may be referred to as a Dom for a man, and a Domme for a woman. Individuals who alternate between top/dominant and bottom/submissive roles – whether from relationship to relationship or within a given relationship – are known as switches, though the term switch in this context is occasionally seen as derogatory and is rejected by many who might simplistically fit the definition. The precise definition of roles and self-identification is a common subject of debate, reflection, and discussion within the community.

A scene can also take place in a club, where the play can be viewed by others. When a scene takes place in a public setting, it may be because the participants enjoy being watched by others, or because of the equipment available, or because having third parties present adds safety for play partners who have only recently met.