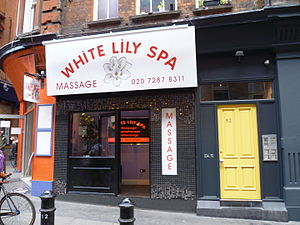 A massage parlor in London's Soho. 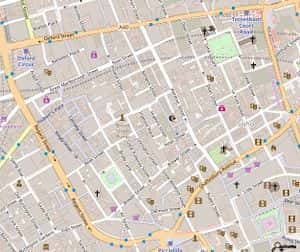 Soho has an area of about one square mile, and is now usually considered to be the area bounded by Oxford Street to the north, Regent Street to the west, Leicester Square to the south and Charing Cross Road to the east. However apart from Oxford Street, all of these roads are 19th-century metropolitan improvements, so they are not Soho's original boundaries. It has never been an administrative unit, with formally defined boundaries. The area to the west is known as Mayfair, to the north Fitzrovia, to the east St Giles, St Giles and Covent Garden, and to the south St James's. According to the Soho Society, Chinatown, the area between Leicester Square to the south and Shaftesbury Avenue to the north, is part of Soho, although some consider it a separate area. Soho is part of the West End electoral ward which elects three councillors to Westminster City Council.

A typical walkup in Soho is usually a very small a flat with a single sex worker. Usually prostitute will have a maid as a companion, usually and older lady. When they are working the walk-up front door will be open and a notice saying “model” or something similar will be clearly on display. Prostitutes are no longer allowed to display signs with the names of the girls working in the flats,

There are usually 2 flats in every Soho walk-up. The maid will let you in after you knock the door or, if the girl is busy, ask you if you want to wait. If you decide to wait, you will probably be told that you will not have to wait more than few minutes, but in reality, you will most likely wait a lot longer. If there is another person waiting already you will be told to return later.

Once in the flat, the sex worker will come and greet you and will ask you what type of services you want - flats usually have a menu on a wall with prices.

If you do not like the sex worker and feel like you do not want to go ahead with the punt excuse yourself politely and leave. Most ladies are used to this and very few will mind. You can pretend you were looking for someone else because girls always work on shifts.

As quite a lot of the walk ups are in clear public view if you are a shy person you maybe concerned about being seen, but you should not. As any Londoner will know most people do not really take notice or care about other people's doings.

If you do like the prostitute then agree what services you want from her and hand over the cash. You will be usually asked to give a few pound tip for the maid.

Some walk-up flats can be a bit sketchy but there are some that are well looked after and nearly always have good girls.

How Much Sex Services Cost in Soho?

First you need to tip the maid for £2 and 10 minutes normal sex costs £20, so it is quite cheap. If you want to get your dick sucked and have sex, then the cost is £30 in Soho. Also if you like to chance the positions during the sex, the cost is £30. So the charging system is very similar to the ones in Germany and Netherlands. You can also get some of the following type of services also: vibrator show and sex £35, Striptease show and sex £30 or water sports cost £35. If you are in to the basics, then hand job is just £20. Naughty guys can also choose spanking which costs £30. Prices above are only for 10 minutes and if you wish to stay longer the costs are following (includes extra service]: 20 minutes £65, 40 minutes £85 or 1 hour £130.