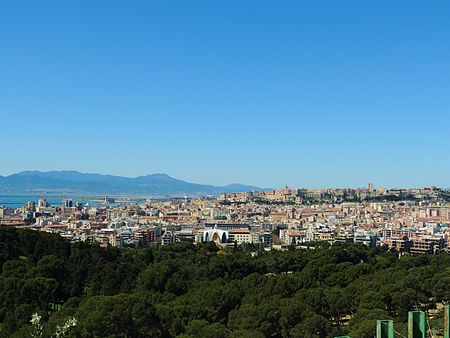 Cagliari is the capital of Sardinia, Italy.

On-street prostitution is very widespread and many sex workers on the streets are from eastern Europe and West Africa, also many small brothels exist employing only one or two prostitutes. According to IOM, 75-80% of 'sex workers' are street prostitutes, because in Italy, unlike some other EU countries such as Austria, Belgium and the Netherlands, there are relatively few 'sex clubss'. According to the Helsinki Committee, one-third of all prostitutes in Italy are Albanian. The women either arrive in Italy legally, for example with tourist or entertainment visas, or are come illegally across the Adriatic.

It is easy to get sex online in Cagliari. You just need to find the best available girls. See Girls Online Here!

There is no actual Red-light district in Cagliari. Prostitutes are spread across but the sidewalks of two major roads entering the city, avenue and boulevard Elmas Monastir, have become very populated with prostitutes. A sex market that spans several streets on the border between the districts of Is Mirrionis and Sant'Avendrace, to look out over the sides of Piazza del Carmine, a stone's throw from the city center and the harbour, where cruise passengers disembark. From the data in the possession of the police prostitutes there are aroun 100 prostitutes out every night, concentrated in seven or eight streets.

Viale Elmas is the territory of about 20 Nigerian prostitutes, while in Viale Monastir there are a dozen Romanian hookers and and ten other Nigerian girls. Among via Simeto and via Po there are about 10-15 Romanian with a small representation of Italian prostitutes. The territory of Sardines is above all via Posada (off Via Santa Gilla), where they work in about a group of 5 girl. A few meters away, in São Paulo, between two regional councils, there are some transexual hookers. Prostitution also comes in Viale Trieste, reaching the Piazza del Carmine, where you can find Sardinian and South American prostitutes.

The Nigerian hookers charge 10-40 euro depending what you want. The Romanian hookers have higher rates from 30 to 60 euro. Italian, Sardinian and trans prostitutes are usually the most expensive and charge from 20 to 60 euro.

Meeting local girls and getting laid for free is fun! Read more on how to pick up girls in Sardinia: https://hookuptravels.com/wiki/Sardinia

Brothels of Cagliari are shady and sometimes untidy. You may be lucky to find a good place yourself, but if you don't want to waste time searching, just call for a taxi and ask a driver to take you to a good whore house.

Can I watch Live Sex Cams in Cagliari? - Yes, you can! Basically you can watch our online live sex shows for free anywhere in the world if you’re connected to internet. You can choose any girl from our trusted WikiSexLive.com! Join to get 10 free private teasers and 9.99 credits for free!

Dating in Cagliari can be a bit tricky due to cultural differences, so your best bet is to sign up for a dating site before your trip so you can meet a few locals ahead of time. AdultFriendFinder.com lets you meet local members in Cagliari and get to know them on a personal basis before you arrive. Take advantage of site features like live chat and member to member webcams so you can begin flirting before arranging a face-to-face meeting. Since your time in Cagliari may be limited, get to know each other’s desires beforehand, so that when you meet you can start having some real fun.

If you are looking for an alternative to escorts in Cagliari with a girl who doesn’t charge by the hour, sugar dating is the ideal solution. There are thousands of beautiful young women at SecretBenefits willing to do anything for a man who will help them pay their bills.

Finding someone for transsexual dating when you’re on the road can be a bit tricky, so your best bet is to sign up for a dating site before you go so you can find locals ahead of time. TSdates.com is a dating site designed to help you find exactly what you are looking for in your hookup in Cagliari. Take advantage of site features like live chat and member to member webcams so you can begin flirting before arranging a face-to-face meeting. With over 40 million members, and thousands of transsexual members around the world, TSdates.com is the world’s largest site of sex-minded friends for discreet encounters and will help you find your next transsexual play partner.

Where can I find shemales in Cagliari? You can watch transsexual live sex shows in Cagliari as long as you are connected to internet. Check Now: Tranny Live Sex Video Chat

You can find transexual Escorts in Cagliari working on the street at the same areas where female hookers work at. Tranny street prostitutes in Caglairi usually charge 50€ for sex. Then there are also some Shemale Escorts who do not work at the street and only take clients at private flats. These type of t-girls are usually more expensive and cost around 100€ (30 minutes). In São Paulo, between two regional councils, you can usually find transexual hookers who want 20-50€ for sex.

Cagliari can be comfortably defined as gay tolerant city. However, don't imagine a Mediterranean version of London or Amsterdam. It certainly is not. And although cagliaritani have grown accustomed to the presence of homosexuals as a reality of everyday professional and social life, it probably isn't ready yet for the most open displays of affection or eccentricity.

Socially speaking, there is no proper gay district or gay club in Cagliari, as you might find in many other cities. There are a number of gay-friendly clubs and pubs, restaurants, hotels and B&Bs, especially around piazza Yenne.

There are plenty of single men willing to start a relationship with a nice foreign woman. There are men who look for fun and sex without responsibilities. Stick to public places and entertainment venues to meet someone. Places get crowded in evenings.

If you don’t feel like visiting or cannot find any local sex shops in Cagliari, you can easily order adult products from Online Sex Shop.

Finding an escort when you're travelling can be a bit tricky. If you are looking for escorts in Cagliari, Escort Directory is the ideal solution. There are thousands of beautiful young women at EscortDirectory.com waiting for your call!

Nowadays almost all sex workers are registered online and have profiles with detailed information about themselves (it includes their characteristics, experience and photos). An hour of sex with a beautiful escort worker costs a couple of hundreds of euros.

About a half of hotels of Cagliari are located on the coastline. Another half of them are scattered all over the city. So if you came here for a vacation, you would need a place close to the sea and if the purpose of your visit is business, then you can choose one of the hotels in the city.

Sardinia has a very low criminal rate; even kidnapping, which targeted wealthy (and at times not so wealthy) individuals until the mid 1980s, has completely disappeared. Some areas of Sardinia (in particular the beautiful Orgosolo area in the Nuoro province) have a longstanding reputation of family feuds; apart from the fact that foreigners were almost never involved in such disputes, these belong now mostly to the past.

Beware that some urban areas (in particular the Sant'Elia district near the football stadium and the San Michele district, both in Cagliari) are unsafe.