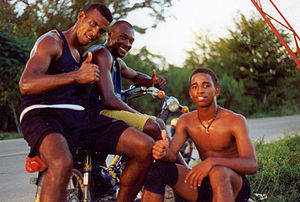 A sanky-panky or sankyx is a male prostitute, found in the Dominican Republic and some other Caribbean countries. A sanky-panky solicits on streets, bars and beaches and has clients of both sexes or only girls. When with men, the sanky-panky assumes an active (fucking], but when with women, assumes the role of an ideal lover.

While strictly speaking they are not sex workers, since they do not directly negotiate money for sex, they are more likely to create a pseudo-relationship which can be continued when the guest returns home. They then attempt to ask for money to be sent to them primarily by wire transfer or Western Union, often using elaborate stories of need, involving (for example) sick relatives. A sanky's ultimate goal is to obtain a marriage visa to the tourist's native country, marry the visitor, then abandon her.

In Peru they are known as bricheros (which are male and usually target female travellers) and bricheras (who are females instead and target male travellers). They hang out in popular tourist hot spots and may even involve themselves in business involving tourism in order to reach their prey.

In certain tourist cities of Venezuela, and specially in the city of Mérida, women following a similar pattern of conduct are known as "Puta-Tour", a pejorative term that relates the person with travel based prostitution. Nevertheless, there are cases where the sex is never reached, and long term friendships are the result. They usually target White American and European travellers, primarily in the interest of learning and/or practicing a foreign language (other than Spanish), serving also as a nice host and tourist guide, but expecting to get invited to travel to the tourist's home country. These relationships can range from friendship to marriage, and are based on the cultural interchanging and traveling, supported by the foreign traveller.

The persona of the "sanky panky" has been brought to the cinema in 2007 by Spanish director Jose E. Pintor. In his comedic film entitled Sanky Panky, audiences follow the life of a young Dominican named Genaro (played by Dominican comedian Fausto Mata who travels to Bávaro to work at a resort in hopes of finding a "gringa" or a white American lady who will give him a visa. In the process, he meets a young heartbroken girl and her two older and oversexed aunts. The story that follows presents the sex girls of Dominican resorts but portrays the realities of poverty in the Dominican Republic while simultaneously immortalizing the "sanky panky" via major motion picture.

A film that explores this topic in a Francophone context is Heading South.