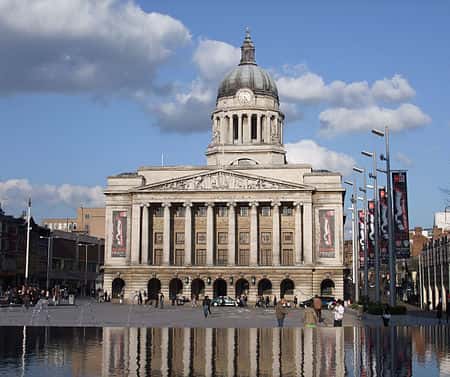 Nottingham is a city in England, affectionately known as the "Queen of the Midlands". It is famed for its links with the world-renowned legend Robin Hood and has a wealth of history, with a settlement existing in the area since pre-Roman times.

Today, Nottingham is a premiere shopping destination and one of the top ten most visited cities in England by overseas tourists.

Sex and Prostitution in Nottingham

In the United Kingdom, prostitution itself (the exchange of sexual services for money) is legal but a number of related activities, including soliciting in a public place, kerb crawling, owning or managing a brothel, pimping and pandering, are crimes.

The red light area of Nottingham has been a long time Forest Road in the north of the city centre. Roads for girls are Forest Road, Forest Road West and the small roads that come off them. Most of the girls are local, although in recent years there has been an increasing number of eastern European girls tout on the street. It is changed a lot from 1990s. when local junkie girls were very aggressive. Prices start from 20£ for a hand job to 40£ for full service. Most girls a bit before dark.

There are very different kind of prostitutes working in Nottingham.

The red light district of Nottingham is Forest Road. If you looking for independent who work on their own, in flats and brothels. Many girls work totally independent and the price range is from 80£ to 150£. But they are mostly really clean. Some girls on streets are drug addicts and HIV positive. Some girls have regular clients and work from home. Many operate only via a mobile phone. Phone numbers are easy to find from local newspaper or check phone booths hold usually business cards for prostitutes.

During the ten year period, over 840 men who were arrested for prostitution offenses in Nottingham took part in a course to modify their behavior. After completing the course, only 2.5 percent of the men were arrested again for solicitation.

You can find streetwalkers around Forest Road West, Forest Road East and Mapperley Road. A quicky costs £20 to £30. Most of the British girls in street prostitution are below average and have drug addictions, but there are some nice ones. There is white and black prostitutes mixed. Recently there have been a number of very attractive Romanian street whores working in the area.

In 2013, city police in Nottingham reported that there were about 50 street prostitutes working in the city. The number of street hookers was down from 250 in 2004, according to police statistics.

Can I watch Live Sex Cams in Nottingham? - Yes, you can! Basically you can watch our online live sex shows for free anywhere in the world if you’re connected to internet. Join to get 10 free private teasers and 9.99 credits for free! You can choose any girl from our trusted Live Sex Cams!

It is easy to get sex online in Nottingham. You just need to find the best available girls. See Girls Online Here!

Finding an escort when you're travelling can be a bit tricky. If you are looking for escorts in Nottingham, Escort Directory is the ideal solution. There are thousands of beautiful young women at EscortDirectory.com waiting for your call!

There are several escort agencies and independent escorts operating in Nottingham area.

Check the section above. Some of the massage parlors are brothels in Nottingham.

If you don’t feel like visiting or cannot find any local sex shops in Nottingham, you can easily order adult products from Online Sex Shop.

Some nightclubs and bars can carry historical significance at the same time.

The age of both heterosexual and homosexual consent is 16 throughout the United Kingdom. The law supports LGBT rights and are some of the most progressive in the world. You cannot be discriminated against in any area of the UK for your sexuality.

37 Stockwell Gate which is in the centre of mansfield right next to the bus station.

The car parks at both ends of Colwick Racecourse have few paths leading into the woods.

If you go down to the woods today you maybe in for more than a surprise.
Locally known as Thieves Wood but it is adjacent in Normans Hill Wood that most cruising occurs.
Take the A60 from Nottingham past Newstead Abbey, turn left at the Larch Farm crossroads. The second turning on the right veers to the left into the woods.
Thieves Wood is on the right and Normans Hill wood are on the left.The car park is up on the left side and there are several clear trails. Don't leave valuables in the car.

Between the Cottage at Trent Bridge and the Suspension Bridge there has always been a certain amount of gay cruising.

Everything what sauna can offer.
Address: 71. Ratcliffe Gate Mansfield Notts. NG18 3AN

Dating in Nottingham can be a bit tricky due to cultural differences, so your best bet is to sign up for a dating site before your trip so you can meet a few locals ahead of time. AdultFriendFinder.com lets you meet local members in Nottingham and get to know them on a personal basis before you arrive. Take advantage of site features like live chat and member to member webcams so you can begin flirting before arranging a face-to-face meeting. Since your time in Nottingham may be limited, get to know each other’s desires beforehand, so that when you meet you can start having some real fun.

If you are looking for an alternative to escorts in Nottingham with a girl who doesn’t charge by the hour, sugar dating is the ideal solution. There are thousands of beautiful young women at SecretBenefits willing to do anything for a man who will help them pay their bills.

Finding someone for transsexual dating when you’re on the road can be a bit tricky, so your best bet is to sign up for a dating site before you go so you can find locals ahead of time. TSdates.com is a dating site designed to help you find exactly what you are looking for in your hookup in Nottingham. Take advantage of site features like live chat and member to member webcams so you can begin flirting before arranging a face-to-face meeting. With over 40 million members, and thousands of transsexual members around the world, TSdates.com is the world’s largest site of sex-minded friends for discreet encounters and will help you find your next transsexual play partner.

Where can I find shemales in Nottingham? You can watch transsexual live sex shows in Nottingham as long as you are connected to internet. Check Now: Tranny Live Sex Video Chat

Check out Park Plaza on Maid Marion Way. The hotel bar has usually few girls looking for company at night time on weekends. Price is usually £100 an hour.

To be sure that it is okay to bring street hooker to your place? Best choice is to rent apartment. 5 star hotels also accepts to bring prostitutes to room in England.

Nottingham has been highlighted by the media for gun and knife crime although the actual incidence in 2004/5 was 19 offences per 100,000 population (compared to 50 per 100,000 population for both Greater Manchester and London) [54]. The reality is that Nottingham is not a dangerous city in spite of its reputation, and, provided you act sensibly, you will be safe. It is best to avoid walking late at night through St Ann's (a council estate northeast of the Victoria shopping centre) and The Meadows (between the railway station and the river), although the Victoria Embankment along the river is quite safe.

Pickpocketing is an ongoing problem around the city square and on the transportation system.

Also, the wearing of Derby County shirts should be avoided due to the rivalry between the main football team Nottingham Forest and Derby County. The rivalry is strong. Derby Country shirts worn in Nottingham have been known to lead to stabbings and attacks.

Keep in the tourist areas. At night, outside the city centre, are some dangerous areas ie Radford to the west, St Anns to the east, Meadows to the south. Radford is unfortunately known for knife crime, illegal drug use, stabbings etc. Pick pocketing in the city centre comes from organized gangs from places listed above and target tourists. Just be careful.

In any emergency call 999 or 112 (from a land-line if you can) and ask for Ambulance, Fire, Police or Coast Guard when connected. If you need more than one service that includes an ambulance (e.g. a road collision) then ask for Ambulance and they will contact the relevant services themselves.