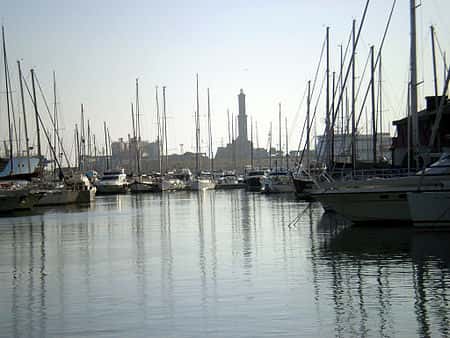 The busy city port, filled to the brim with yachts, boats, cruises, ferries and cargo ships. Genoa is a very important sea town in the Mediterranean.

Genoa (Italian, Genova) is a historical port city in northern Italy, the capital of the Region of Liguria. Genoa today, as a tourist attraction, is often shadowed by cities such as Rome or Venice, even though it has a long history as a rich and powerful trade centre. However, with its multitude of hidden gems behind cozy alleyways, excellent cuisine (notably fish and seafood), renovated old port, beautiful sights (including one of Europe's biggest aquariums), and its position as the European Capital of Culture in 2004 have made the birthplace of explorer Christopher Columbus an enticing place which is gradually becoming more included in the touristic market.

The best way to find a lady of good quality, is to look in the local newspaper (IL SECOLO XIX), for ladies who work from flats. Of course, there is internet ads, but there is a lot of bait and switch scams there too, so watch it.

It is easy to get sex online in Genoa. You just need to find the best available girls. See Girls Online Here!

Like many other cultural cities, Genova is separated into the Old Town and the New Town. In the old town (small streets between "Principe Station" and the port area) you may find ladies from midday onwards. Usually they have their own small apartments/studios nearby, quality of ladies is not very high, rate about 30-50 Euro per one hour.

The Old Town is a maze of narrow lanes, or ‘caruggi’, which ascend up from the waterfront and is home to many old churches, grand palaces and street-corner shrines where the streets can get incredibly crowded. It’s also where you will find the city’s Red-light district, which is obviously seedy with hookers lurking down many an alleyway,- Vico della Rosa ,for example, has a few girls sitting or standing, waiting for clients. The place is a little bit dangerous at night-time especially if you are alone. It is an area where many heroine addicts hang out. The few Italian prostitutes , most likely are heroin addicts too.

The center of Genova , in the 1980's to 1990's ,had the so called 'bassi' , basement 'studios' for prostitutes to receive their clients. Lots of South American female prostitutes, with a few Italian ones.A few transvestites too. Expect market rate of services.

The New Town, on the other hand, (which is not actually new) is where you’ll find the more up-market girls. Via Garibaldi which is popular with tourists.In the eastern side of the town, near Brignole Station and the Exibition Center you my find ladies on the road (Via Brigata Bisagno), they are usually from Albania and they are there only from 11pm. to 3/4pm. Rate is 30 Euro for sex in the car. 100 Euro for 2hours in a small hotel.

A few at the water front, rather seedy area in front of the old town.

In 2014 in the Sampierdarena area (west side 15 min. By taxi from the city center) You may find a bar called SAN FRANCISCO where after 11pm, some 10/20 ladies (depending from day and season) are waiting for customers.However these bars/resorts get raided by the police quite often, so by 2016 it's not sure it's still open. Best bet ask for info from the taxi driver, hoping he doesn't take you to a scam strip club in exchange for a commission.

Brothels are illegal. But possibly unofficial ones exist.

Can I watch Live Sex Cams in Genoa? - Yes, you can! Basically you can watch our online live sex shows for free anywhere in the world if you’re connected to internet. You can choose any girl from our trusted WikiSexLive.com! Join to get 10 free private teasers and 9.99 credits for free!

Dating in Genoa can be a bit tricky due to cultural differences, so your best bet is to sign up for a dating site before your trip so you can meet a few locals ahead of time. AdultFriendFinder.com lets you meet local members in Genoa and get to know them on a personal basis before you arrive. Take advantage of site features like live chat and member to member webcams so you can begin flirting before arranging a face-to-face meeting. Since your time in Genoa may be limited, get to know each other’s desires beforehand, so that when you meet you can start having some real fun.

If you are looking for an alternative to escorts in Genoa with a girl who doesn’t charge by the hour, sugar dating is the ideal solution. There are thousands of beautiful young women at SecretBenefits willing to do anything for a man who will help them pay their bills.

In the past 20 years there was been expansion of swinger clubs all over Italy.

Finding someone for transsexual dating when you’re on the road can be a bit tricky, so your best bet is to sign up for a dating site before you go so you can find locals ahead of time. TSdates.com is a dating site designed to help you find exactly what you are looking for in your hookup in Genoa. Take advantage of site features like live chat and member to member webcams so you can begin flirting before arranging a face-to-face meeting. With over 40 million members, and thousands of transsexual members around the world, TSdates.com is the world’s largest site of sex-minded friends for discreet encounters and will help you find your next transsexual play partner.

Where can I find shemales in Genoa? You can watch transsexual live sex shows in Genoa as long as you are connected to internet. Check Now: Tranny Live Sex Video Chat

Often escort agencies provide sexual services both for men and women. You will rarely find a straight male escort agency. Call a manager to order a hot macho to your hotel room.

If you don’t feel like visiting or cannot find any local sex shops in Genoa, you can easily order adult products from Online Sex Shop.

You can find basic items from Genova sex shops. Some of the Genoa sex shops have also adult arcades as mentioned below.

Cinema Eldorado via buranello, Genoa cinema accessible to all people, Gay Action in the back.

Finding an escort when you're travelling can be a bit tricky. If you are looking for escorts in Genoa, Escort Directory is the ideal solution. There are thousands of beautiful young women at EscortDirectory.com waiting for your call!

Nowadays ordering a prostitute is as easy as ordering pizza! Modern escort agencies have big and detailed websites which allows you to choose a prostitute easily. An hour of sex costs several hundreds of dollars on average.

An average hotel of Genoa has a smart TV, a free parking and wi-fi and breakfasts. Dozens of places to sleep are located all over the city. The cheapest room costs 40 Euro while the most expensive one costs several hundreds of Euros.