Prostitution in Spain is not addressed by any specific law, but a number of activities related to it such as pimping are illegal. 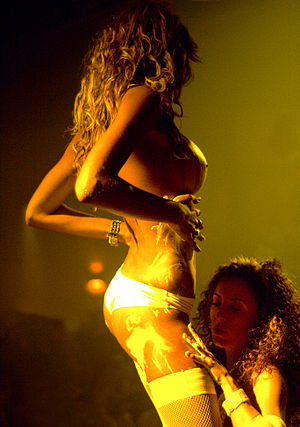 Prostitution (Prostitución) was decriminalised in 1995. Prostitution itself is not directly addressed in the Criminal Code of Spain, but exploitation such as pimping is illegal.

The only article in the Code dealing specifically with adult prostitution is Artícle 188, which bans pimping.

"Determines, using violence, intimidation or deception or abuse of a position of superiority or need or vulnerability of the victim, forcing a person into prostitution or into remaining in it, will be a punishment with imprisonment from two to four years and a fine of 12-24 months. In the same penalty shall apply to lucre from the prostitution of another person, even with the consent of the same."

Owning an establishment where prostitution takes place is in itself legal, but the owner cannot derive financial gain from the prostitute or hire a person to sell sex because prostitution is not considered a job and thus has no legal recognition.

Local governments differ in their approaches to both indoor and outdoor prostitution, usually in response to community pressure groups, and based on 'public safety'. Most places do not regulate prostitution, but the government of Catalonia offers licenses for persons "to gather people to practice prostitution". These licenses are used by brothel owners to open 'clubs', where prostitution takes place (the women are theoretically only 'gathered' to work on the premises not employed by the owner). Some places have implemented fines for street prostitution.

According to a 2009 TAMPEP study, 90% of sex workers are migrants. Of all countries studied, only Italy had such a high percentage of migrant workers. About 80% of these were Latin American (mainly from Ecuador, Colombia and the Dominican Republic) (see also Laura Oso, 2003, 2010), however this is changing rapidly due to arrival of Central European migrants (mainly Romania and Bulgaria) who now make up 25% compared to 50% from Latin America. There is also considerable cross-border traffic between Spain and Portugal and France. Equally, some 80% of Spanish national workers have worked outside Spain, mainly from economic necessity. This needs to be appreciated in the overall context of Immigration to Spain. As in other countries in Western Europe, there is concern over the presence of migrant workers on the streets and claims that many of them were coerced. In 2008 the Spanish Government announced plans to aid women who had been trafficked.

The 30 November of 2012, arrest in Cuenca a woman from Paraguay, 34 years old, when work in a burdel, with his daughter minor age.

Spanish sex workers continue to be concerned about their lack of protection and in July 2011 petitioned the Minister of Health (Leire Pajín). [33] A demonstration is planned for November 6, 2011 in Madrid, and a communique has been released setting out sex workers' complaints and demands. [34]

Prostitution in Spain was highly sectored, with at one end the damas cortesanas of high society, [35] and the mistresses of the bourgeoisie and barraganas, the concubines of the clergy.

Goya (1746–1828) frequently commented on the place of prostitution in Spanish high society [36] such as satirising the church's involvement in the trade, for profit. Best known though are his controversial Majas. Other examples are Murillo's Four Figures on a Step and Picasso's Les Demoiselles d'Avignon (illustrated).

In literature, Cervantes discusses prostitution in Don Quixote, and the subject is found throughout 19th and 20th century Spanish literature.