WikiSexGuide in Port of Spain, Trinidad and Tobago.

Trinidad and Tobago is a nation consisting primarily of two Caribbean islands just off the northeastern coast of Venezuela. The country is the most industrialised and one of the most prosperous in the Caribbean. Overall, tourism is not a major industry (though the island of Tobago has proportionally more), leaving the islands replete with natural unspoiled beauty not found in most other Caribbean countries.

Prostitution in Trinidad and Tobago is illegal. Trinidad is more of a choice if you are in to the local whores and partying. Tobago is more if you like to chill by the beach, fuck other travellers.

Following non-pro clubs in trinidad are recommended to visit if you're searching for local girls. 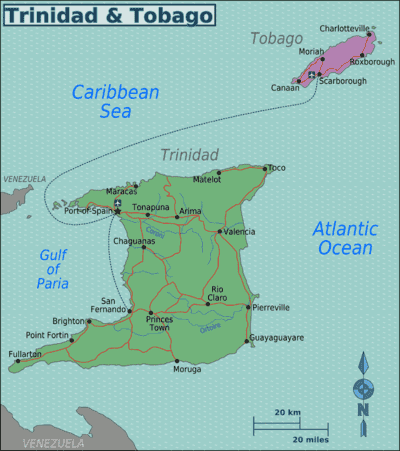 Map of Trinidad and Tobago

It is easy to get sex online in Trinidad and Tobago. You just need to find the best available girls. See Girls Online Here!

There is no specified Red-light district in Trinidad and Tobago. But in Port of Spain there are many sex workers at the downtown.

Trinidad and Tobago is a destination, source, and transit country for women and youngsters subjected to trafficking in persons, specifically forced prostitution. Some women and girls from Colombia, Dominican Republic, Venezuela, and Suriname who had been in prostitution in Trinidadian brothels and clubs have been identified as trafficking victims. Trinidadian trafficking victims have been identified in the United Kingdom and the United States. Undocumented economic migrants from the region and from [[Asia may be vulnerable to forced labor and forced prostitution. As a hub for regional travel, Trinidad and Tobago also is a potential transit point for trafficking victims traveling to Caribbean and South American destinations.

Over 100 women work on the streets at night-time in Trinidad's capital city, Port of Spain. Some average and bad looking streetwalkers can be found around Victoria Square in Port of Spain. You can also find street prostitutes on Roberts Street in Woodbrook area in Port of Spain. They can be usually found after dark if the police haven't made a raid that night and locked them up. Cost to have sex in Port of Spain starts from $20 USD.

You can watch sometimes striptease shows in the brothels in Port of Spain. Check out the brothels section below.

Newspaper reports of police raids on brothels generally find between 20 and 30 women being arrested, but many of the women are foreigners (often from Colombia or other South American countries).

Where to find Brothels

Massage parlors are a dime to a dozen, but it's hard getting reliable service out of them. They are usually listed in the personals classified section of the Newsday, Express and Guardian. The Newsday has the always most listings. The Massage Parlors rates start from 150TT per one hour for a sensual massage w/ a handjob at the end to 250TT for a body to body massage with a covered blow job. Most Massage Parlors offer sex, which would start from 300TT per Hour depending on what you want. These places normally operate from 9a.m. to 7p.m. and is useful for day time mongering. At most of these parlours you could ask the girl for her cell number to contact her for after hour services.

Can I watch Live Sex Cams in Trinidad and Tobago? - Yes, you can! Basically you can watch our online live sex shows for free anywhere in the world if you’re connected to internet. You can choose any girl from our trusted WikiSexLive.com! Join to get 10 free private teasers and 9.99 credits for free!

Dating in Trinidad and Tobago can be a bit tricky due to cultural differences, so your best bet is to sign up for a dating site before your trip so you can meet a few locals ahead of time. AdultFriendFinder.com lets you meet local members in Trinidad and Tobago and get to know them on a personal basis before you arrive. Take advantage of site features like live chat and member to member webcams so you can begin flirting before arranging a face-to-face meeting. Since your time in Trinidad and Tobago may be limited, get to know each other’s desires beforehand, so that when you meet you can start having some real fun.

If you are looking for an alternative to escorts in Trinidad and Tobago with a girl who doesn’t charge by the hour, sugar dating is the ideal solution. There are thousands of beautiful young women at SecretBenefits willing to do anything for a man who will help them pay their bills.

Finding someone for transsexual dating when you’re on the road can be a bit tricky, so your best bet is to sign up for a dating site before you go so you can find locals ahead of time. TSdates.com is a dating site designed to help you find exactly what you are looking for in your hookup in Trinidad and Tobago. Take advantage of site features like live chat and member to member webcams so you can begin flirting before arranging a face-to-face meeting. With over 40 million members, and thousands of transsexual members around the world, TSdates.com is the world’s largest site of sex-minded friends for discreet encounters and will help you find your next transsexual play partner.

Homosexuality is illegal in Trinidad & Tobago and gay visitors are not officially welcome. However, with a population of over 1 million there are gay people on the islands and a small scene to boot. Unfortunately, successive governments in Trinidad & Tobago have refused to repeal ancient laws on homosexuality which date back to Queen Victoria time. The laws are not enforced and no prosecutions have been made for years. Because of the legal position and the prevailing homophobic attitude in society many gays are in closet. Many gay locals marry and have homosexual relations "on the side". There are some gay and lesbians who are more open and there is a bigger gay scene in Trinidad & Tobago than any other Caribbean country except Puerto Rico. The gay scene is centralized in the Port of Spain and there are at the time of writing three gay bars/clubs plus a number of mixed places. During Carnival time people let their hair down and after much drinking anything goes with sexual prudery being thrown out the window. Despite the legal position Trinidad & Tobago is definitely some where to think about if you fancy a holiday in the Caribbean where there is some gay life.

Similar to Jamaica and other Caribbean islands, Trinidad and Tobago has a reputation for attracting female sex tourism, which some believe has contributed to the rise in AIDS on the islands.

If you don’t feel like visiting or cannot find any local sex shops in Trinidad and Tobago, you can easily order adult products from Online Sex Shop.

Finding an escort when you're travelling can be a bit tricky. If you are looking for escorts in Trinidad and Tobago, Escort Directory is the ideal solution. There are thousands of beautiful young women at EscortDirectory.com waiting for your call!

The Personals section in the classified ads are common source. There are usually around 60 such ads, though some of these are for the same "agency" with different telephone numbers. Most of these places appear to employ around three to six girls. There are about 50 this type of escort agencies in Trinidad and Tobago. Cost is usually 200-300TTD for hour. Some people prefer Massage Parlors vs. Escort agencies because of the fact that at the Parlors you can see the selection of girls beforehand.

In Port of Spain, the bar called Pelican Inn is a GREAT place to pick up (or BE picked up by, if you look like a rich American) a companion for the evening. Unfortunately, the fancier hotels make it hard for you to get her up to your room.

Trinidad and Tobago has one of the highest murder rates in the world. Generally, it is best to travel with the sun. When it sets, make sure you are in a safe place with people you trust. This is more important in Trinidad than in Tobago. In Port of Spain, areas east of Charlotte Street become increasingly unsafe (but this shouldn't be considered an absolute boundary -- on some east-west streets you can go a block or two further). Stay out of East Dry River, Belmont, and Laventille.

In previous years crime tended to peak in the Carnival (January-March) and around Christmas (October-December) seasons, but recently crime activity was year round, but this has now drastically decreased due to the new change in government. But it is still best to exercise some caution at night time, while in Trinidad and Tobago.

In an emergency dial 999 from any telephone for the police. Dial 990 for the fire department and 811 for an ambulance. These calls are free of charge from any telephone, including payphones (no coins or cards required). For foreigners with countries that have reliable police emergency assistance, it should be noted that when dialing "999" in an emergency the police do not always answer the call or show up when assistance is needed.

The islands are in an earthquake zone, though serious quakes are extremely rare.