Pascha is located in Cologne and is one of the biggest brothels in the world. 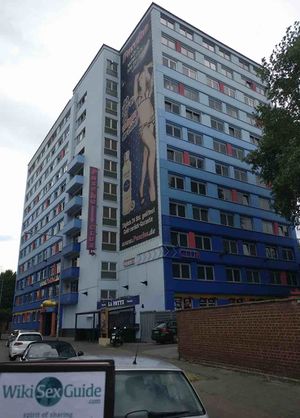 WikiSexGuide at the front of the Pascha mega brothel

The Pascha is a 12 storey 9,000 square metre brothel in Cologne, Germany. With about 120 prostitutes, over 80 employees and up to 1000 customers per day, it is the largest brothel in Europe.

The brothel was opened in January 1972 in the Hornstraße, under the name "Eros Center". It was Europe's first high rise brothel. The city of Cologne wanted to eliminate the red light district "Kleine Brinkgasse" in the city centre and issued a licence to build the new brothel on land owned by the city in the outskirts of town. The prostitutes sued against closure of the Kleine Brinkgasse area and ultimately lost. In 1995 the owner of the Eros Centre changed after foreclosure, and the new name "Pascha" was introduced. They later added houses under the same name in Salzburg, Munich and Linz.

The house rents 126 rooms on 7 floors to prostitutes for a fee of 180 Euros per day, which includes meals, medical care, and the 20 Euros of tax that authorities collect per prostitute per day (including Cologne's "pleasure tax" of 6 Euros). The women come from many countries; about 30% of them are German. They typically sit outside of their rooms and negotiate with customers who wander the hallways. Some of the women live in their rooms, others rent a second room to stay in, while still others stay in their own apartments in Cologne.

The house is open 24 hours a day; customers of the prostitutes pay an entrance fee of 5 Euros and then negotiate directly with the women, who work independently and keep all of the money. One floor is reserved for low-cost service and another one for transsexual prostitutes. The house also contains a regular hotel, a table dance nightclub with separate entrance, several bars, and a separate club-style brothel on the top floor.

In 2003, oral sex and intercourse cost about 50 Euros. The brothel advertises a money-back guarantee in case of unsatisfactory service by a woman.

Tips for your Pascha Visit

Repeat customers usually get better service than tourists. It is advisable to pretend that you are in city for a longer period of time. This way you get better service because she wants to see you again to get more money. Be aware of the fact, that there are some scammers that want to squeeze out as much cash out of you as possible and returning as little as necessary or nothing at all.

When you negotiate the price make sure:

• what is the maximum time

You will avoid to get scammed if you make things clear from the beginning. Some hookers (usually the German whores that believe they are something better than their Latina and eastern European counterparts) promise you everything. Don't lose your head! If you do, this may happen: Suddenly she will only allow you to lower your jeans a little and will start to give you a hand job. She will ask for more money for oral sex, than she will charge another 20€ if she takes off her bra and each other promise will set you back more and more financially without any real benefit. This scam is designed to get you to a point when you will just say, NO and leave with less euros and no satisfaction at all. Rather give up your initial investment of 30 € and venture for a new girl if you get caught in this trap. The girl has secret alarm buttons in her room and within a short time 2 or 3 flatheads with pitbulls will be waiting in front of her room and not let you leave before you pay her. They will ask for money themselves. Usually pay is before service. However it is advisable to pay after if possible or deposit the money on a table visible for the lady so she can take it after the job is done. 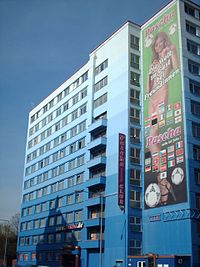 The Pascha and the poster during the 2006 FIFA World Cup,
with the Saudi Arabian Flag and Iranian Flag blacked out after protests and threats.

In June 2003 a Thai prostitute was stabbed to death by a customer in the Pascha; she managed to press the alarm button in her room and security personnel caught the culprit. In January 2006, another prostitute was attacked by a customer with a knife. The woman working next-door alerted security and the perpetrator was caught; the victim survived.

After a police raid of the brothel in April 2005, it was reported that a gun and some cocaine was found and 23 prostitutes were arrested, most of them because of suspected violation of immigration laws. Further it was reported that four of the prostitutes were between 14 and 15 years old. The brothel was not fined however, since the girls, who were from Africa, looked older and carried fake documents showing an older age.

A bizarre story was reported in August 2005: two women, 19 and 29 years old, had rented two rooms in the Pascha and announced over the internet that they would pay any man 50 Euros for sex; the goal was to find out who could have more partners in one day. In the end they had sex for 11 hours with a total of 115 men, and about 1,700 others had to be turned away. The German tabloid Bild turned the story into a headline the next day. The women insisted that they had paid the men from their own vacation money and had not received any compensation from Bild or Pascha.

Before the 2006 FIFA World Cup in Germany, Muslims protested that the brothel insulted Islam when it advertised using a 24-metre-high by 8-metre-wide poster, mounted on the side of its building, containing a half-naked woman and the flags from all of the countries which qualified for the world cup, including those of Muslim nations. The slogan on the poster read "Die Welt zu Gast bei Freundinnen" ("The world as guest with girlfriends"), a pun on the slogan for that year's World Cup, "Die Welt zu Gast bei Freunden" ("The world as guest with friends"). The protestors compared the poster to the Jyllands-Posten Muhammad cartoons controversy. In response to the protests, and threats of violence, which began on 2006-04-21, the owners blacked out the flags of Saudi Arabia and Iran (both of which include words from the Quran, though the flag of Tunisia (which does not show any scriptural text) was left alone.

In March 2007, the Pascha announced that senior citizens above the age of 66 would receive a discount during afternoons; half of the price of 50 Euros for a "normal session" would be covered by the house.

In September 2007, a Turkish customer tried to set fire to the Pascha by igniting gasoline in the entrance area; he also carried a number of Molotov cocktails. He had earlier had a conflict with a prostitute and security personnel and returned with 10 accomplices. He received a suspended sentence of two years in prison.

In 2008, Pascha offered free entrance for life to the brothel and the night club to men who agreed to have Pascha's logo tattooed on their arm; about forty men took them up on the offer.

In December 2008, three of Pascha's bouncers beat up an Albanian man who supposedly had ignored an order to stay away from the house and who might have been involved in the bouncer scene. The three men received fines and suspended sentences of 18 months for aggravated assault.

On Mother's Day 2011, the brothel organised a tour for women; female guests are normally not admitted to the establishment.