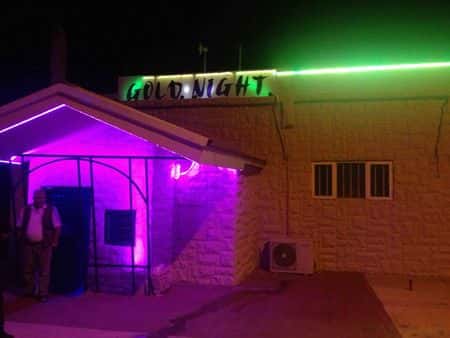 Brothel in Famagusta towards to South Cyprus border.

Note also that the numerous Cypriot "cabarets" are not what their name implies but rather brothels associated with organized crime. 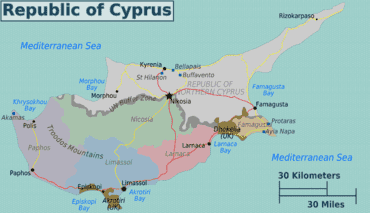 Cypriot cities have a variety of historical spellings and writings, all in fairly common use, and which change according to the context, whether it be Greek Cypriot, Turkish or English tourist. The following list emphasizes traditional English spellings, that will most often be encountered by the traveller.

Brothels in (North) Cyprus are often called "Nightclubs". Many of the Nightclubs are located outside of the cities next to the highways or smaller main roads. They are quite easy to notice because of the bright neon colours on the big signs next to the road. Normally there is also a profile of a naked woman in the logo as well so you basically cannot miss those places if you are driving and looking for these places.

There are usually couple of men waiting for customers outside of those places. They are doing business there and you can ask prices and other details how does it work before you go in. Good idea would be ask to see at least some of the working girls before you pay the entrance fee or make any other deals. Also ask how many girls there are working at the moment and from which countries. Prices for one hour varies from 120 to 250 Turkish liras at Turkish Republic of North Cyprus area.

To find all the brothels in the northern side of the Cyprus, you can check out North Cyprus Brothels.

It's difficult to tell addresses of these places because of their unusual locations next to the highways. So easiest way is to show them in a map or describe the directions.

Can I watch Live Sex Cams in Cyprus? - Yes, you can! Basically you can watch our online live sex shows for free anywhere in the world if you’re connected to internet. You can choose any girl from our trusted WikiSexLive.com! Join to get 10 free private teasers and 9.99 credits for free!

Dating in Cyprus can be a bit tricky due to cultural differences, so your best bet is to sign up for a dating site before your trip so you can meet a few locals ahead of time. AdultFriendFinder.com lets you meet local members in Cyprus and get to know them on a personal basis before you arrive. Take advantage of site features like live chat and member to member webcams so you can begin flirting before arranging a face-to-face meeting. Since your time in Cyprus may be limited, get to know each other’s desires beforehand, so that when you meet you can start having some real fun.

If you are looking for an alternative to escorts in Cyprus with a girl who doesn’t charge by the hour, sugar dating is the ideal solution. There are thousands of beautiful young women at SecretBenefits willing to do anything for a man who will help them pay their bills.

You can find plenty of escorts advertisement in Cyprus from online escort directories.

Lesbian, gay, bisexual, and transgender (LGBT) persons in Cyprus may face legal challenges not experienced by non-LGBT residents. Both male and female same-sex sexual activity are legal in Cyprus and civil unions became legal in December 2015. In Cyprus, the socially conservative Eastern Orthodox Church has a significant influence over public opinion when it comes to LGBT-rights. However, ever since Cyprus sought membership in the European Union it has had to change its human rights legislation, including its laws regarding sexual orientation and gender identity.

Cyprus is a remarkably safe country, with very little violent crime. Cars and houses frequently go unlocked. That said however, it is wise to be careful when accepting drinks from strangers, especially in Ayia Napa, since there have been numerous occasions of muggings. There also occasional residual hostility towards people of Turkish origin or appearance in the south side, so people of such origin are advised not to reveal it.