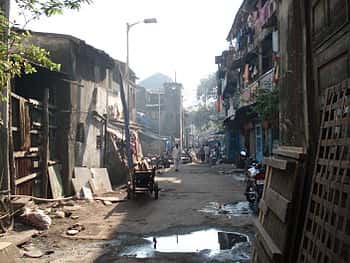 A lane in Kamathipura, a red light district in Mumbai.

Kamathipura (also spelled Kamthipura) (Marathi: कामाठीपुरा) is Mumbai's oldest and Asia's second largest red-light district. It was first settled after 1795 with the construction of causeways that connected the erstwhile seven islands of Bombay. Initially known as Lal Bazaar, it got its name from the Kamathis (workers) of Andhra Pradesh state, who were labourers on construction sites. In 1880s it turned into a "comfort zone" for British troops, during British Raj. Due to tough police crackdown, in the late 1990s with the rise of HIV/AIDS and government's redevelopment policy that helped sex workers to move out of the profession and subsequently out of Kamathipura, the number of sex workers in the area has dwindled. In 1992, Bombay Municipal Corporation recorded there were 50,000 sex workers here which was reduced to 1,600 in 2009, with many sex worker migrating to other areas in Maharashtra and real estate developer taking over the high-priced real estate.

When the British left India, the Indian sex workers took over. In recent decades, large numbers of Nepalese women and girls have also been trafficked into the district as sex workers. Over the years under Indian government rule, the sex industry in Kamathipura continued to flourish, and trafficking brought women from different parts of the country here. Eventually it became Asia's largest sex district. 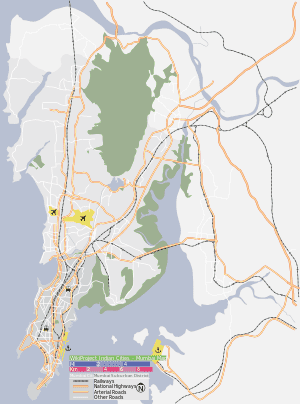 Today, it is said that there are so many brothels in the area that there is no space for the sex workers to sit. They hang around in the streets, solicit customers, and then rent an available bed. The 3,000-odd buildings in the area are largely dilapidated and in urgent need of repairs; safe drinking water and sanitation is scarce as well.

Originally, Indian girls and women native to the area were used as prostitutes in Kamathipura. Women from parts of Japan and mainland Europe were smuggled into Kamathipura via sex trafficking in order to work in the area. When the area came under Indian control, women from nearby countries such as Nepal have also been brought in to work.

Life of prostitutes in Kamathipura

Often, girls are made to work in prostitution in Kamathipura from a very young age, non of them really start working there in their twenties. In addition, these girls are usually from very poor backgrounds. As a result, they have little or no formal education, and are dependent upon their "owners".

Quite often, the girls' "owners" will addict the girls to drugs in order to ensure their loyalty - if their manager (so to speak) is the only person who can give them drugs, the girls will stay loyal to them, and will not try to leave.

Girls in Kamathipura can deal with tens of customers per day. As a result, they often have a number of sexually transmitted infections or diseases, and many even have conditions such as AIDS as a result of their work.