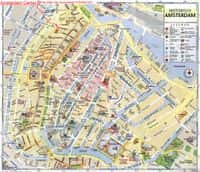 De Wallen is the red area marked in the map 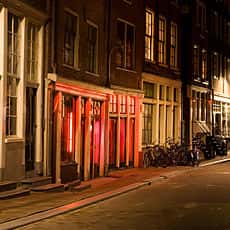 The Red Light District consists of several canals, and the side streets between them, south of Central Station and east of Damrak in Amsterdam. Known as 'De Wallen' (the quays) in Dutch, because the canals were once part of the city defences (walls and moats). Prostitution itself is limited to certain streets, mainly side streets and alleys, but the district is considered to include the canals, and some adjoining streets (such as Warmoesstraat and Zeedijk). The whole area has a heavy police presence, and many security cameras. Nevertheless it is still a residential district and has many bars and restaurants, and also includes historic buildings and museums — this is the oldest part of the city. The oldest church in Amsterdam, the Netherlands-gothic Oude Kerk on the Oudezijds Voorburgwal at Oudekerksplein, is now surrounded by window prostitution. The area has many sex shops and peep show bars. This section of town is a common attraction for bachelors celebrating a stag night, if you ever get hassled, a firm and loud "Leave me alone" will work most of the time. 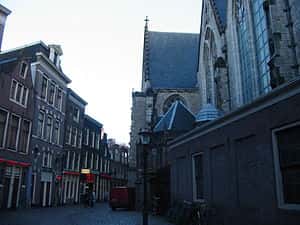 Prostitution behind the Oude Kerk 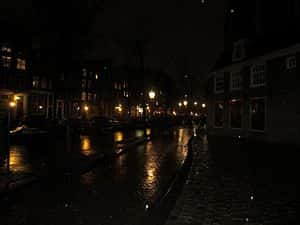 Between Sint Jansstraat and Sint Annenstraat and running parallel to them are Leidekkerssteeg, Gooijersteeg, Blaauwlakensteeg and Zwartlakensteeg. At least three of these had red light windows which were closed in the 1970s. Today these alleys are blocked by locked gates although the remains of some bricked over windows can be seen in the architecture. In the 1990s Slapersteeg was also closed and a gate now blocks the alley.

In the 1990s parts of Sint Annenstraat and Sint Annendwarsstraat were demolished. The rooms in Goldbergersteeg were opened after this time.

Tips for you De Wallen Visit

Repeat customers usually get better service than tourists. It is advisable to pretend that you are in city for a longer period of time. This way you get better service because she wants to see you again to get more money. Be aware of the fact, that there are some scammers that want to squeeze out as much cash out of you as possible and returning as little as necessary or nothing at all.

When you negotiate the price make sure:

• what is the maximum time

You will avoid to get scammed if you make things clear from the beginning. Some hookers (usually the Dutch whores that believe they are something better than their Latina and eastern European counterparts) promise you everything. Don't lose your head! If you do, this may happen: Suddenly she will only allow you to lower your jeans a little and will start to give you a hand job. She will ask for more money for oral sex, than she will charge another 20€ if she takes off her bra and each other promise will set you back more and more financially without any real benefit. This scam is designed to get you to a point when you will just say, NO and leave with less euros and no satisfaction at all. Rather give up your initial investment of 30 € and venture for a new girl if you get caught in this trap. The girl has secret alarm buttons in her room and within a short time 2 or 3 flatheads with pitbulls will be waiting in front of her room and not let you leave before you pay her. They will ask for money themselves. Usually pay is before service. However it is advisable to pay after if possible or deposit the money on a table visible for the lady so she can take it after the job is done.